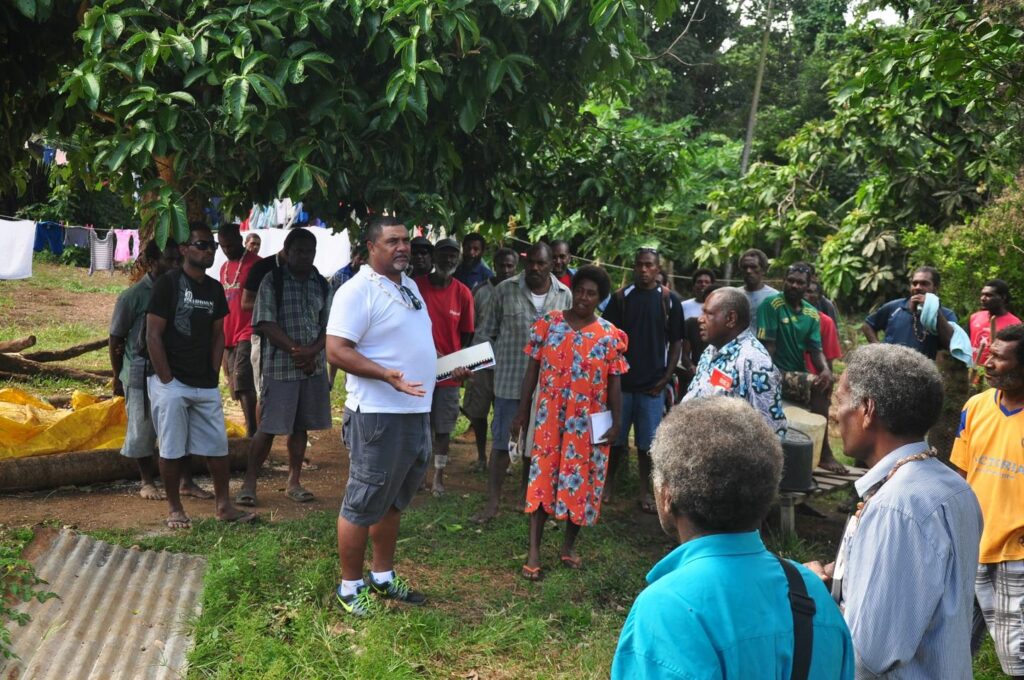 Stephen conducting PGS training and introducing organic agriculture for the Emae community in Vanuatu in 2016.

Mr Hazelman was elected as a board member of the Inter-Continental Network of Organic Farmers’ Organizations (INOFO) Board of Continents; he was also appointed as a committee member of IFOAM – Organics International’s Participatory Guarantee Systems (PGS) Committee.

Mr Hazelman was elected to INOFO’s board at the network’s General Assembly which concluded on 25 October 2021. As part of the six-member board, Stephen will represent the voices of organic farmers in the Oceania Pasifika region to INOFO and consequently to IFOAM – Organics International, the world body for organic farming.

Mr Hazelman said he was “honoured to represent our Oceania Pasifika region for the sake of growing our organic movement.” He said he would use the platform to help Pacific organic farmers share their experiences and challenges and how the INOFO Board of Continents can help to address some of these.” Stephen is taking on the role of the Global Secretary to the INOFO Board.

INOFO is the farmer platform for IFOAM Organics International which, as a community, helps drive the organic narrative around the globe. The INOFO General Assembly offers a platform for organic farmers around the world to network, exchange knowledge, lobby and advocate for issues and solutions.

In addition to the role as INOFO’s Global Secretary, Mr Hazelman was also selected to be part of the IFOAM PGS Committee. Stephen was chosen due to his extensive PGS experience on regional and international platforms such as POETCom and INOFO.

Stephen says: “I am honoured to represent all the PGS groups in the Oceania Pasifika Region – this is a reflection of the hard work that all our PGS groups are doing in our region. We hope to share our lessons and also learn from other PGS groups around the organic world.”

The core functions of the IFOAM PGS Committee are to: assist the development of PGS; provide the IFOAM – Organics International head office with advice on how to develop, facilitate and encourage PGS around the world; participate in mid-term and long-term strategic planning for activities on PGS; and identify and systemise PGS concepts and tools appropriate for the facilitation and promotion of PGS.

POETCom congratulates Mr Hazelman for taking on these key roles and hopes the POETCom community will rally behind him in support.

The Participatory Guarantee System is a locally focused organic assurance system aimed at providing credible organic guarantee to consumers seeking organic produce through the direct participation of farmers and consumers in the organic guarantee process. The Pacific Ethical Trade and Community (POETCom) community programme of the Pacific Community manages the use of the organic mark known as ‘Organic Pasifika’ which is obtained through the application of the PGS system.